View source
watch 01:36
We're Getting Mutants in the MCU - The Loop
Do you like this video?
Play Sound

Arrival is the eleventh studio album by Journey. It is the first album to feature Steve Augeri as lead-singer.

The album was released in Japan in late 2000 but, due to it's leakage onto the Internet, the band decided to delay it's release in the United States. Based on the feedback from fans who heard the leaked version of the album, the band decided to record two harder rocking songs, which were included on the American version of the album, which now did not retain "I'm Not That Way" from the Japanese release. 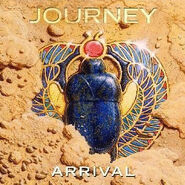 The Japanese version
Community content is available under CC-BY-SA unless otherwise noted.
Advertisement